I had the privilege to be part of two comic book related events this past September in New York City.

Howl! Festival
The first event I attended was a panel discussion called "Inside Out: Self and Society in Comic Art: Trends in Autobiography, journalism and social critique in graphic novels.”with moderator Calvin Reid (Publisher's Weekly Comics Week); artists Jillian Tamaki (Skim), Josh Neufeld (A.D.: New Orleans After the Deluge) and James Romberger (Seven Miles a Second); and editor at DC/Vertigo, Pornsak Pichetshote. It was held at St.Mark's Church in the Bowery, New York and was one of the panel discussions held as part of the annual Howl Festival. Sept. 10, 2008. Edward Carey from Comics Culture was present and has loaded the complete transcript of our discussion in two parts called Inside Out: Self and Society in Comic Art. 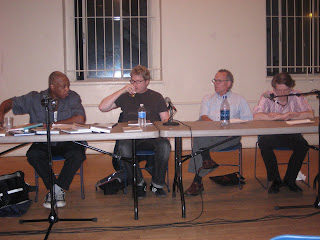 The publication of my book, Wordless Books (2008) and Hajdu’s Ten-cent Plague (2008) inspired this panel discussion that was organized by Gerald Cloud, Librarian for Reference and Research at Butler Rare Book & Manuscript Library. Moderator, comics scholar, and rare book curator Mike Kelly lead this discussion with myself and Hajdu on current scholarship, historical perspectives, and a consideration of the place wordless books, graphic novels, and comics hold in both contemporary culture and the History of the Book.

After our presentations and a lively discussion there was a book signing and we later continued our conversation at a restaurant, joined by my wife, Rose O’Brien and Charlie Kochman, Executive Editor of Abrams ComicArts. 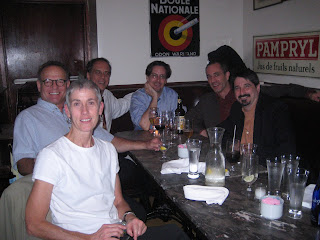