The Art of the Woodcut Novel 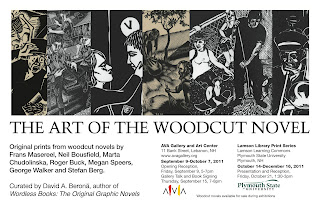 I am curating an exhibition “The Art of the Woodcut Novel,” at the AVA Gallery and Art Center, Lebanon New Hampshire in the Rebecca Lawrence Gallery Entry and Clifford B. West Gallery on September 9 – October 7, 2011 with an opening and reception on September 9. A gallery talk will be held on September 15, 7 pm. A workshop, "Tell Your Story in Pictures," with Katherine Larocca will be held on September 24, 1-4pm. On September 29, 4:45- 5:30 pm. I will be a guest speaker at the International Comic Arts Forum (ICAF) Annual Conference hosted by The Center for Cartoon Studies (CCS), Briggs Opera House. White River Junction, VT. Conference attendees are invited to AVA Gallery and Art Center.

This exhibition will travel to Lamson Learning Commons (LLC), Plymouth State University as part of the LLC Print Series on October 14 – December 15, 2011 with an opening on October 14. On October 21, 1:30-3:00 p.m. I will be the guest Speaker at Visual Resources Association (VRA) (New England) Conference, Hartman Union Building. Plymouth State University (PSU). Students and faculty on the PSU campus are also invited to this presentation on the woodcut novel.

A Korean edition of my book has just been published by Vis and Biz in Seoul, South Korea. I am really excited about reaching an Asian audience and look forward to receiving feedback from readers. This is a good example of how wordless books, that I examine in my book, communicate across borders, regardless of our cultural and language differences. I am really grateful for this opportunity and I hope that this opens up a dialogue about pictorial narratives between our cultures.
Posted by dberona at 4:08 PM 1 comment: 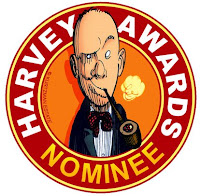 Wordless Books: The Original Graphic Novels was nominated for the prestigious 2009 Harvey Award in the category of Best Biographical, Historical or Journalistic Presentation.

Named in honor of the late Harvey Kurtzman, one of the industry’s most innovative talents, the Harvey Awards recognize outstanding work in comics and sequential art. They will be presented October 10, 2009 in Baltimore, MD, in conjunction with the Baltimore Comic-Con. Nominations for the Harvey Awards are selected exclusively by creators – those who write, draw, ink, letter, color, design, edit or are otherwise involved in a creative capacity in the comics field. They are the only industry awards both nominated and selected by the full body of comic book professionals. Professionals who participate will be joining nearly 2,000 other comics professionals in honoring the outstanding comics achievements of 2008. 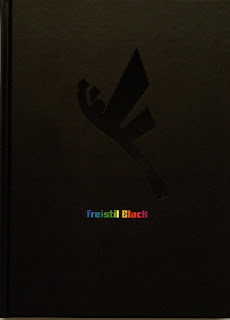 I am honored to have the first chapter of my book included in Freistil, the prestigious bi-annual of European commercial illustration published by Verlag Hermann Schmidt Mainz, 2009. "Freistil reveals the breath and the evolution of the culture of illustration. Here, you will discover talents, aspects and technical finesses, not to mention the trend of a culture that develops rapidly and is distinguished by the daring to take clear, individual standpoints." [Backcover]

Wordless Books: The Original Graphic Novels was awarded First Place Book in the Special Trade/ Adult Graphic Novel category in the 23rd Annual New York Book Show sponsored by the Bookbinders' Guild of New York. Mark Evanier's Kirby, King of Comics was the Second Place winner and Chip Kidd, Geoff Spear, and Saul Ferris's Bat-Manga! The Secret History of Batman in Japan won Third Place in the category. This festive event was held on March 24, 2009 in the Grand Ballroom at the Manhattan Center. 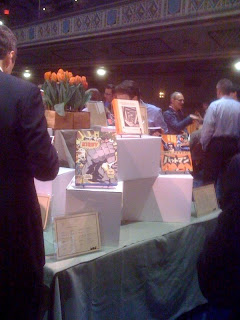 I was so honored to learn that my book was chosen a winner in this show. To learn on the night of the show that it was awarded the First Place Book in the Adult Graphic Novel category among so many other fine books was even more exciting. This award reflects the creativity with my publisher, Harry N. Abrams, and Robert McKee, book designer; Anet Sirna-Bruder, Production Coordinator; Michelle Ishay, Art Director; and Charlie Kochman, my editior. This award shows that the early wordless books and woodcut novels that I have studied for many years are finally being respected for a strong social message and admired for their visual impact.

Judges' Comments
"Three part 'torn' binding is very unusual and interesting. Typography is beautiful and appropriate. Layout and composition is very elegant. Tints are very even. Paper choices are excellent. Shows a great respect for the graphic novel genre."


The books have been selected from more than 900 entries from book publishers and printers, large and small, throughout North America, Europe, and Asia. 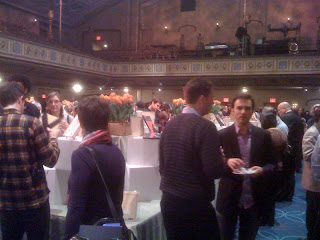 "For many of us," stated Eric I. Schwartz, President of The Bookbinders' Guild of New York, "including myself, the New York Book Show is the highest point of our seasonal calendar. Each year the New York Book Show is a demonstration of the care and creativity of the producers of great books, from the type on the page ,to the paper they are printed on, to the ideas they represent. It is an affirmation of the vitality of a technology first invented in the 1450s and a celebration of the multifarious permutations of the book within the community that has the greatest stake in its continued success."
Posted by dberona at 10:40 AM No comments:

I presented a slide show on the early wordless books, woodcut novels, contemporary wordless comics, and picture books on Tuesday, March 17, 2009 at 7 p.m. at Pease Public Library, Plymouth, New Hampshire. It was a very well attended event with a reception and book signing, hosted by Katherine Hillier--Library director, staff, and volunteers.

Posted by dberona at 9:54 AM No comments: 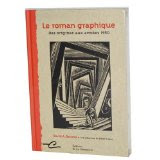